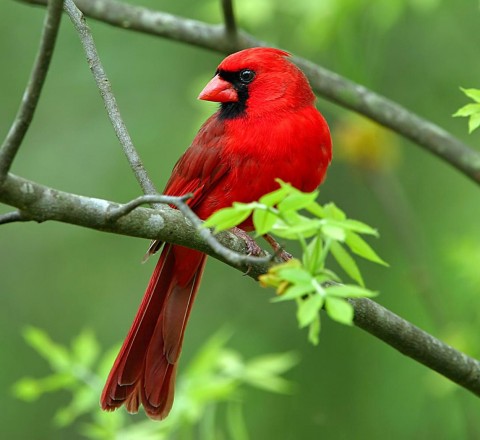 Today, I'm beginning a series of posts about the birds that call our backyards home. You know the ones I mean. You see these guys at your birdfeeders or singing from the branches of your shade trees. Maybe you have a vague idea of what they are, but don't know much about them. Or maybe you've been trying to ID them, and haven't had any luck so far. I'm hoping this series (which will be interspersed here and there between other posts in the months ahead) will help you recognize what you are seeing and learn a bit more about each species. We'll be taking them a one or two at a time, starting with some of the most common of all. Even non-birders will likely have noticed these guys and maybe even identified a few of them, already.

Let's start with that most beautiful of songbirds, the northern cardinal. Most people residing in the eastern half of the United States will surely recognize this bird by the bright red color and the jaunty crest, but those in western states are pretty much out of luck where the cardinal is concerned. A look at the range map below will verify that cardinals are year-round residents from the northeastern-most parts of the country through Texas and bits of Arizona. But then their range drops south into Mexico, Guatemala, and Belize.

Range Map for the Northern Cardinal

The first Europeans to settle in North America named the bird for the bright red robes of the ecclesiastical cardinals of the Catholic church, and in truth, that same bright red color is probably what accounts for the popularity of the bird, overall. In addition to being the mascot for many sports teams, the cardinal is the state bird of Illinois, Indiana, Kentucky, North Carolina, Ohio, Virginia, and West Virginia. It also has the distinction of being featured more often than any other bird on Christmas cards and in winter calendar photos. What could be prettier than a cardinal in snow, after all? Unless it's a cardinal in a palm tree, of course. For some of us, that's a better option all the way around. 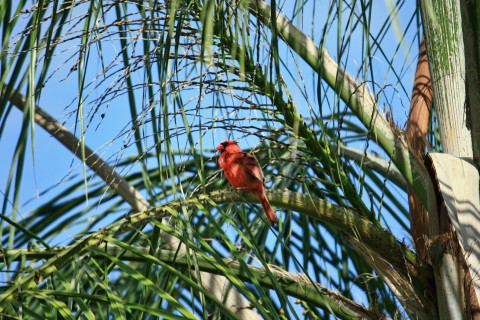 Florida--the rules are different here. Especially in the winter!

How to identify a cardinal? This one is SO easy! It's our only red, crested songbird, and if that isn't enough, it has a striking black mask on its face, and a short, sturdy, ORANGE bill, designed for cracking the seeds that make up the bulk of its diet. 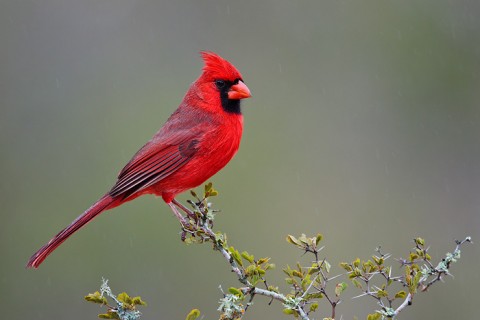 A One of a Kind Sorta Bird! 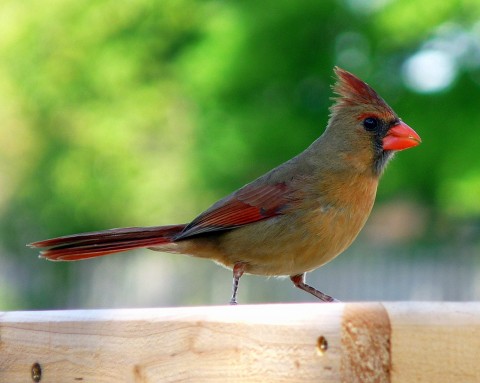 The female cardinal is simply a less colorful version of the male, with brownish feathers over most of her body and a slightly smaller mask. Her bill is orange, too, which is the easiest way to tell a female cardinal from an immature cardinal, which have black bills until they molt into their adult feathers. 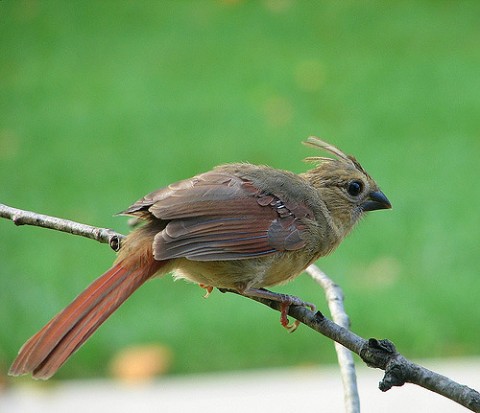 Immature cardinal, fledged but not a full adult. Note brownish feathers similar to the female, but with a dark beak. 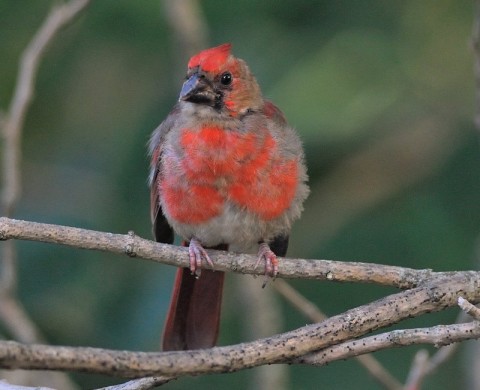 Another immature cardinal, partway through his molt into adult plumage.
Beak will remain dark until he's fully adult. 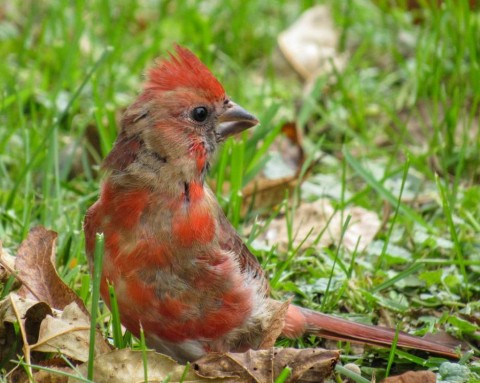 These guys can get downright ratty at this stage, but it's a passing thing. See? 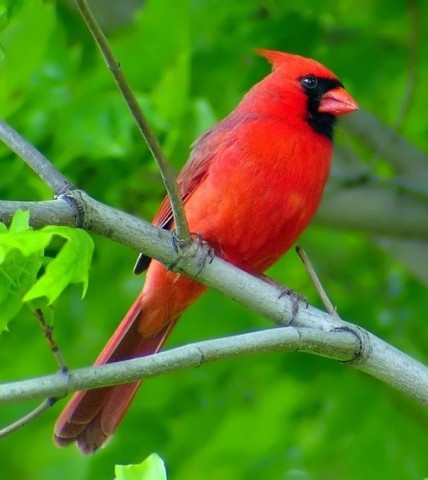 Who you callin' ratty, lady??

Now some statistics and basic info for those who love that sort of thing. Like me.

Go HERE to listen to various cardinal songs and calls. The loud, cheerful song of the cardinal is one of the first I hear each day, both in the wee hours of morning and in early to late evening. Like many birds, the males are definitely most vocal when claiming territory or wooing a mate. They tend to be much more quiet during the raising of their chicks, largely as a protective measure, I believe, in order to help conceal the location of the nest.

A group of cardinals can be called a college, a conclave, a deck, a radiance, or a Vatican. (A couple of these, especially the last one, refer to the bird's red color resembling that of the cardinals of the Catholic church, as mentioned above.) 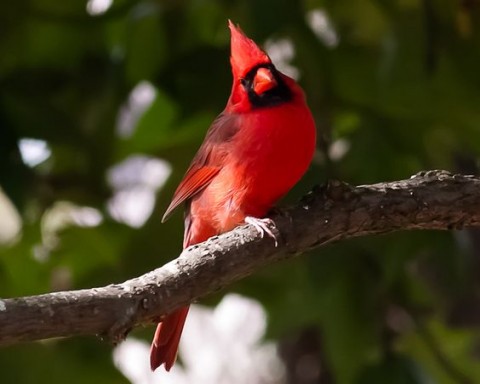 A very alert cardinal, crest raised about as high as it gets.

Having handled many a cardinal back in the day when I cared for orphaned birds at Florida Audubon, I can attest that while its short, stubby beak looks harmless enough, a cardinal can deliver a wicked hard bite, and they hang on like a bulldog! Invariably, they'd grab the tender skin between my forefinger and thumb, and I used to wonder if I was going to have to body slam the bird to get it to let go! *sigh* Looks can be so deceiving. *wink* Thankfully, I never had to do that, and I lived to tell the tale. The cardinals I handled did, too, if they weren't already dying before they were brought to me.

The northern cardinal can live up to fifteen years in the wild, and with a potential of 3 clutches of 3 to 5 chicks a year, COULD raise 60 chicks over that timespan! (GO, Cardinals!) Studies show that males that have brighter red plumage feed at higher rates and may, as a result, do better reproductively than males that aren't quite as vividly colored. (Hey, every lady likes a sharp-dressed man, you know. Just sayin' . . . )

On that note, I think I'll wrap this one up. Hope you've enjoyed learning a bit about one of our most common and beloved backyard birds. The next up in this series will likely be the Tufted Titmouse. Unless it's the Bluejay. Or the woeful-sounding mourning doves. I'll narrow it down soon. But next week's post will feature another bird often seen along the St. Johns River. Hint: It's TALL. And one of those birds that's beautiful in the air, but maybe a bit less so on the ground.

Thanks for stopping by today. Wanna see some wildlife
for yourself? Take a ride on the Naiad, with Captain Dooley at
the helm, and Doug Little taking photos and pointing out the sights.
You'll LOVE it, I promise! 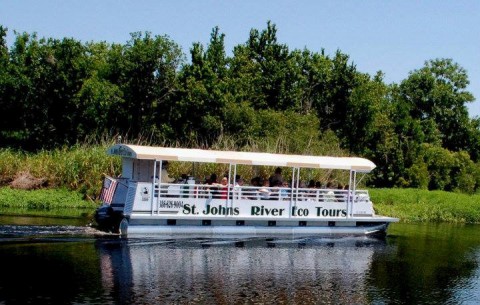 And when you get back home from the cruise,
perhaps a good book would be just the thing?
(Available on Amazon in both Kindle & print formats.)

Another LBJ For Ya!

#NotesFromTheRiver - The Fairest of Them All

Goodness me, Marcia, that bird can sing. We have nothing so colourful 0 nearest is the kingfisher I think.. And what a lovely song. x

0 Cancel Reply
Goodness me, Marcia, that bird can sing. We have nothing so colourful 0 nearest is the kingfisher I think.. And what a lovely song. x
Cancel Update Comment

So nice to see you here! And yep, they can sing, all right. It always makes me smile to hear their beautiful song. Between cardinals and our Carolina wrens, my garden always sounds great. (Right now, it sounds a lot better than it looks, as we are STILL cleaning up after Irma!) The cardinal is truly one of our most colorful and beautiful birds, for sure. So glad you enjoyed reading about them. And thanks for taking the time to comment, too.

0 Cancel Reply
So nice to see you here! And yep, they can sing, all right. It always makes me smile to hear their beautiful song. Between cardinals and our Carolina wrens, my garden always sounds great. (Right now, it sounds a lot better than it looks, as we are STILL cleaning up after Irma!) The cardinal is truly one of our most colorful and beautiful birds, for sure. So glad you enjoyed reading about them. And thanks for taking the time to comment, too. :)
Cancel Update Comment