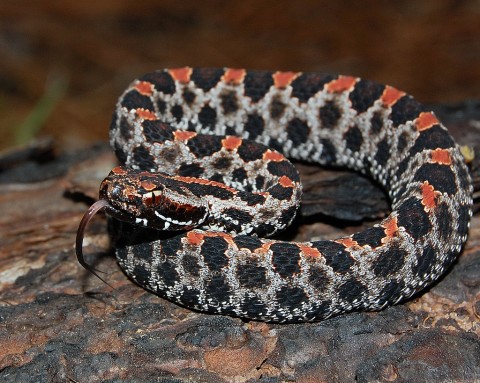 Last week, I told you all about the largest venomous snake in the United States, the eastern diamondback rattlesnake. Today, I'd like to tell you about his "dotty little cousin," the dusky pygmy rattlesnake. If diamonds are the hallmark of last week's big boy, polka dots are the hallmark of this week's little guy. And yes, he's a pretty small snake, averaging about 15" to 22" in length, though once in a great while, you might see one a bit larger. I never have, but YOU might. Who knows? I've heard there are a few out there. But being under 18" on average, these guys aren't as long as a full-grown eastern garter snake, which can get up to 28" or longer.