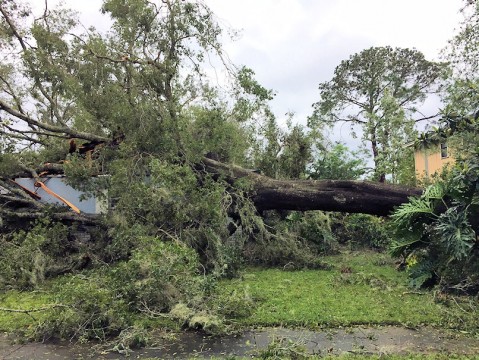 Neighbor's Tree On Our House

Some of you may remember that the last time I posted was September 6, as we were getting ready for Hurricane Irma. If not, here I am, jiggling your memory. On September 10, well before the last of the hurricane swept through Sanford, a series of tornados touched down hither and yon in our area. One of them snapped our neighbor's tree off at the base, and slammed it down on top of (and completely through) our garage! It brought down the roof, the attic flooring, the garage ceiling, rafters, and many a heavy box from the attic--and dumped it all on top of our new Honda, at which point life as we knew it came to a long halt. 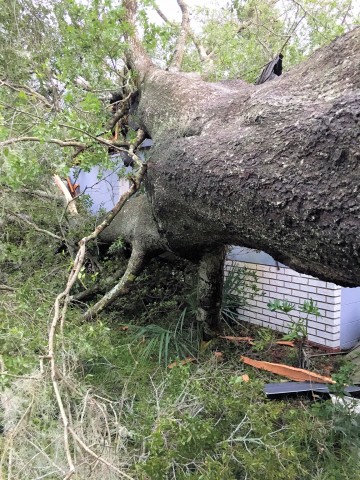 The tree was enormous. It took 9 days to find a tree service to bring out a crane and remove it from our crushed garage. (They said in 25 years of business, it was the biggest tree they'd ever removed from a house!) 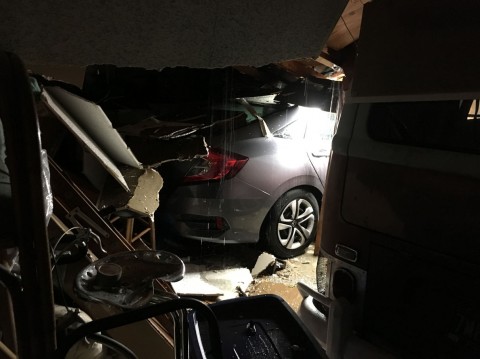 This is all we could see of our vehicles when we peeked in the door the night of the storm.

The garage door was crushed,  rain poured in, boxes continued to slide out of the attic for days, and eventually, the Honda was the only thing holding the roof of the garage up. (Had this fallen on the living portion of our house, we would have been seriously injured, or possibly even killed.) It took four full weeks before we could find a contractor willing to remove the garage door, enter, and try to jack up the ceiling to extract the cars. (All the rest said they wouldn't set foot inside until the garage had been demolished. Doug Miller was a braver soul. We hired him (Timberland Builders) to give his plan a try, and by golly, they did it. 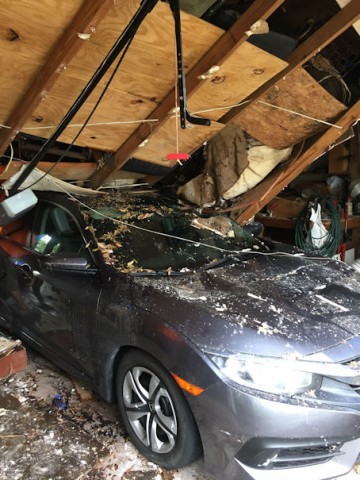 What we saw when the garage door was removed.
And the trunk was a flip view of this, with rafters angled the other direction resting directly on it, too.

Doug and his men tried several ways to get the roof lifted high enough to pull the vehicles out, and finally built frames to support the roof, then jacked those up. It worked, and they immediately became my heroes, and got the job of rebuilding and repairing the $75,000 worth of structural damage to our garage and roof. 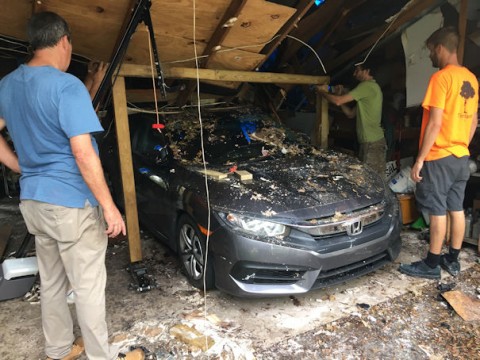 We expected the car to be a total loss, with frame damage from all the weight. Imagine our surprise when we were able to drive it out, and discovered that the damage was all cosmetic, and the car could be repaired and repainted for $6,200. (Thank you, State Farm!) And Mark's vintage VW van, which, even unrestored, is worth more than twice as much as the brand new Honda, didn't have a scratch. If he hadn't switched it to the interior wall side of the garage right before the storm, it would have been pancaked. (It does NOT have the type of frame and structural strength of the Honda, and would have pancaked right to the floor). 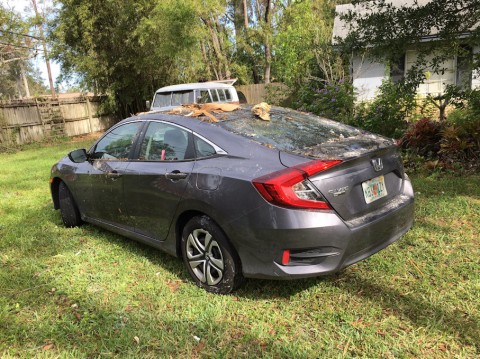 And thus began what has morphed into an ongoing ordeal (over three months, now) of insurance agents, contractors, sub-contractors, clean-up team, demo guys, framers, electricians, plumbers, stucco repairmen, and now roofers. I feel like I haven't had a moment to catch my breath since Irma flew into town like the Wicked Witch of the West, and made a mess of things. Even my yard and garden are pretty much destroyed. What wasn't blown over was smashed flat, uprooted, or drowned, even though we didn't flood here. So it will be several more weeks before all the repairs are finished, and months before we put the yard and garden to rights. (And don't even get me started about the 20' storage pod taking up my whole driveway, and the 16' construction dumpster taking up the rest of the front yard!) 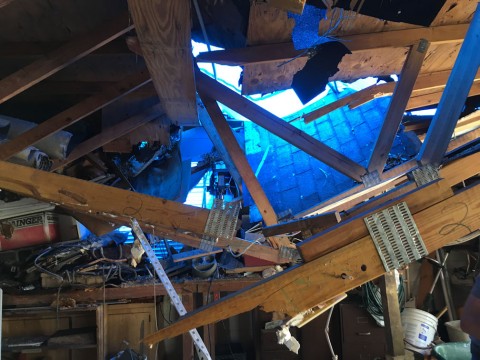 A View of the Garage roof, after the cars were removed. Eeep. 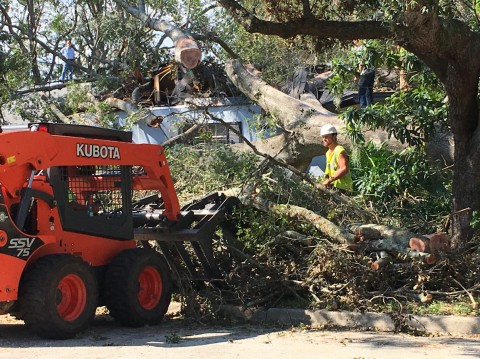 Tree removers, cutting up tree into sections to lift down from the roof. Each one was a tree in itself!
(That's Mark on the left of the roof, too curious to resist climbing up for a look-see.) 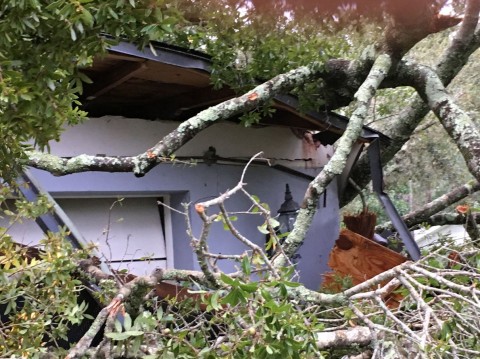 And a bit of the exterior damage.
A goodly portion of the concrete block was severely damaged, and the lintel over the door had to be replaced, as well. 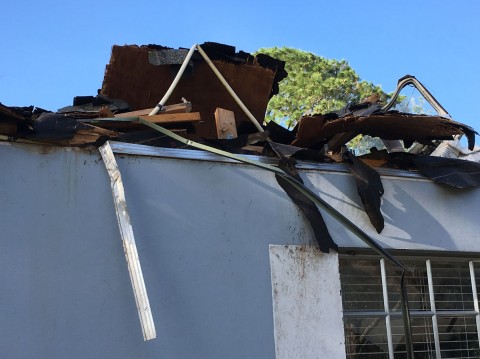 View of the huge hole before tarping.
Those of you with sharp eyes might notice a car door sticking up on the right side of the hole.
There might be a story in that someday! :)

I could show you dozens and dozens more photos, each just as bad or worse, but I'll be merciful. Suffice it to say that going through something like this is not conducive to writing (deadlines on my latest book have been missed again and again), nor to blogging. The days go by in a blur of hammering and sawing, and long, long, LOOOOOOOONG waits on the phone in pitiful attempts to reach actual persons to talk to about these claims. (Both insurance companies and mortgage companies should be ashamed of themselves! They have acknowledged everything is covered, over the deductible, but just try to talk to them about it! ACK!!)

I do apologize profusely not being able to blog each week, but I see the end in sight. Roofers are finishing up today, and most of what's left is smaller things--the last of the electrical work, the new attic floor and garage ceiling, and painting. So maybe another 2 weeks before life returns to normal. (Except for a LOT of weekends spent on cleaning and replanting the yard). I very much hope to resume normal #NotesFromTheRiver posts next Wednesday, or VERY shortly thereafter.

In the meantime, I will say this about what happened to us. I love our contractor. He's been a gem. But the process itself is slow, often delayed due to weather or waiting for inspectors to show up. It's frustrating at times, loud, disruptive, and annoying. What it is <I>not,</I> is tragic. And for many, many people, the recent storms have been just that. Tragic in the extreme. They've lost everything thing they had, including in some cases, loved ones. So Mark and I have been blessed that we weren't injured in this. Our home is still standing. We have food on our table, and a (soon to be new) roof over our heads. And for that, we are very, very grateful!

I hope all of you are doing well, too, and have been having enjoyable holidays. Here's wishing everyone a joyous and prosperous 2018, and here's to a not so fond farewell to Hurricane Irma! May her like nevermore be seen around these parts again!

Happy New Year, Everyone! See you next week, I hope!

No comments made yet. Be the first to submit a comment